When Patrick came to the My Secure Advantage (MSA) Financial Wellness program, he was looking at divorce and taking on new debts and bills by himself.  He took a financial wellness survey and got a 3.5 out of 10, indicating that he had high financial stress. 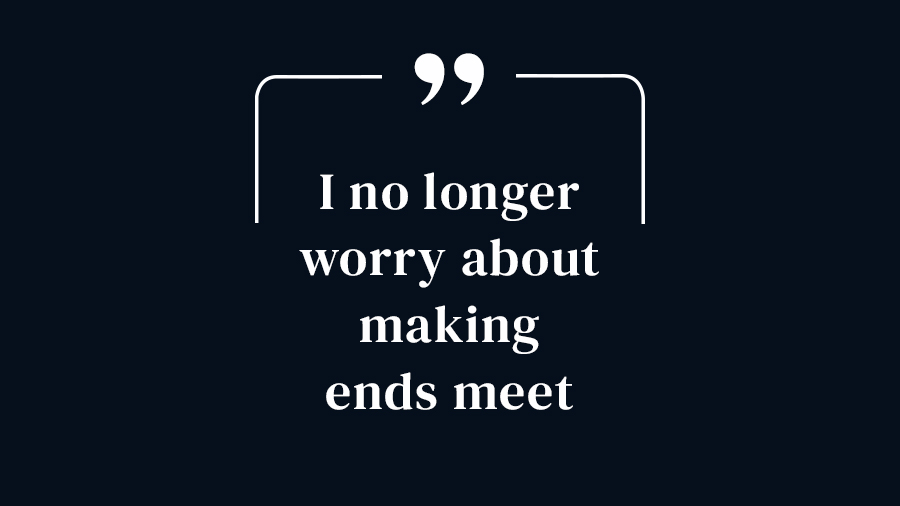 When Patrick came to the My Secure Advantage (MSA) Financial Wellness program, he was looking at divorce and taking on new debts and bills by himself.  He took a financial wellness survey and got a 3.5 out of 10, indicating that he had high financial stress.  See how working with MSA helped him face his divorce and money challenges with new found confidence.

As Patrick put it:  “When I first called, I was a mess as I was in the middle of my divorce.  I started taking on mortgage by myself, along with taking care of the bills on my own, as before my wife had managed this portion.  This was challenging as I went from a dual income to a single one.”

Patrick was immediately connected with Angelik, a MSA Money Coach and Certified Credit Counselor who could help him overcome his financial challenges.  Together, they developed and achieved two goals: a spending plan and a debt strategy.

Because of the pending divorce, Patrick had to start paying bills that he hadn’t previously taken care of.  The new responsibility was quite overwhelming.  That’s why Coach Angelik suggested the use of a spending plan that would help him regain control of his cash flow.

Creating a spending plan revealed that Patrick had a deficit of $700, when it came to having enough income to meet expenses.  Coach Angelik gave Patrick tips on how to cut down costs; for example, Patrick dropped cable and switched internet providers for a better price.

Even those small steps of cutting costs were relieving for Patrick, and he saw major improvements%

Debbie entered the MSA Financial Wellness program with high financial stress.  She began working with Patrick, a Money Coach and Certified Credit Counselor.  Coach Patrick gave her ideas on how she might improve her situation.  Here are some examples: Tip #1:  Don’t just follow your budget, assess it. Assessing your lifestyle and how it aligns […]

Aaron was twenty-five and already plugged in to a great career, when he realized his bad habit of incurring debt meant gambling away his financial stability and future.  Through the My Secure Advantage (MSA) financial wellness program, Aaron started working with Lee – a Money Coach who helped him build an action plan for financial […]

Building a dream home may seem impossible with so many other financial responsibilities – especially if you’re nearing retirement, but one couple had the dream and made it possible by working with their personal Money Coach, even when several major obstacles blocked their way. Cherie and her husband were in their 50s and 60s, when they […]

Rhianna had three weeks off work for knee surgery.  She was in pain and frustrated, but it wasn’t just the recovery process she found exasperating.  It was her finances. Rhianna needed accountability to help her deal with debt, overspending, a condo worth less than she owed, and wanting to buy a house.  Through her employer, […]

Have any questions, concerns or need help?
Give us a call Monday through Friday, 6am - 8pm Pacific Time